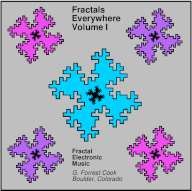 This is a collection of 26 audio tracks (flac).
It was initially released as a cassette
tape that I put together in 1991 called
"Fractals Everywhere Volume 1".
The master DAT tapes were eventually assembled and released as a CD
and put for sale on one of my web pages.
Sales of the CD fell off many years ago, so I am releasing this material to
the public, enjoy.
In the early 1990s, I attended a speech at NIST in Boulder, CO by
Benoit Mandelbrot, the mathematician who brought fractals into
the public eye.  When I asked Mandelbrot what he could say about
fractal music, his reply was simply: "Beethoven, Beatles, and Bach".
The software for most of the tracks was run on a DOS 3 system driving
several MIDI synthesizers including a Yamaha TX81Z FM synthesizer,
a Sequential Circuits Pro-One and an ARP Odyssey.
Effects used on the tracks include an Alesis Quadraverb,
a home-made voltage controlled panner (tracks 4, 18, 21, 23) and
another home-made device called the Time Bender (tracks 20, 21, 24).
The Time Bender uses an envelope follower circuit to modulate
the oscillator in a digital delay to create a chaotic non-linear feedback
system that is reminiscent of some of the effects used by Jimi Hendrix
in his later works.
Track 10, Benoit's Blues, is the oldest track.  It was created in the late 1980s
on the first version of the software running on an Imsai 8080 CP/M system
driving a rudimentary square wave synthesizer.
Most of the melodies were created using a menu-based
C language program called pf2 (poly fractal version 2) and
jokingly called NASA or the New Age Synthesis Algorithm,
tracks 16, 25 and 26 could be described as new age music.
To build a track using pf2, I started out by generating random melodies until
a pleasing one was found.  After picking a melody, the program was directed to
render a fractal pattern in which the pattern was played in the keys of the
pattern's notes.  This process could be repeated to a selected number of
fractal levels, usually 2 or 3.  The first note of the melody was sent to its own
MIDI channel in some cases.
The loudness of the notes was also modulated in the same manner and in
some tracks (tracks 7, 17, 18, 22), the rhythm was also fractal-modulated.
Once the track was been generated, the various synthesizers were assigned
and adjusted for the preferred sound, then the effects were added and
the track was recorded on either a Teac A3340S four track analog recorder
or directly to a Tascam DAT recorder.
Track 9 contains two different melodies that were fractalized and
played in unison.  Track 15 used a microtonal scale from the
TX81Z synth.

Uploaded by GForrestCook on September 18, 2019